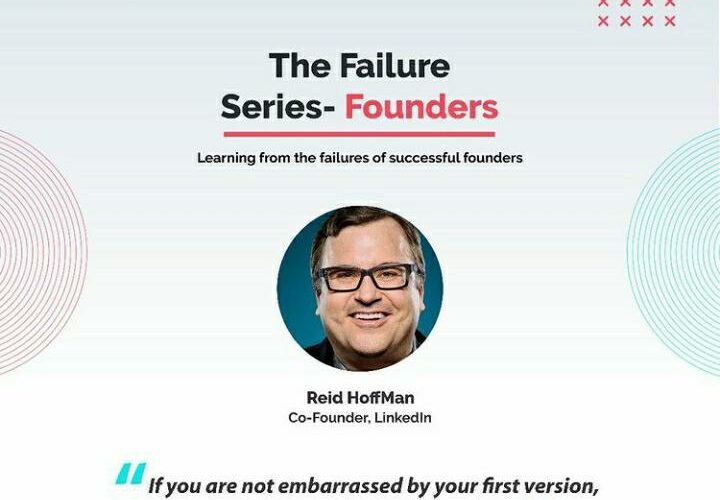 Every week, we take a deep dive into the failures of founders, the major lessons from their failures and how despite these failures, they turned out successful. Most times we see the successes of startups and their founders that we tend to forget how much effort and sacrifices the founders had to make and how they got to where they are today.

For the first episode in this series (The Failure Series – Founders Edition), we would be learning about Reid Hoffman – a venture capitalist and co-founder of LinkedIn – and how his past failures made a major impact on his success today.

Currently, Reid Hoffman is one of the world’s billionaires with a net worth of $2.4billion but it wasn’t all roses from the jump. From the start, he had always been convinced that he was going to try and influence the world on a larger scale and at that time, his best bet was to study to become a professor. When he realized he wasn’t going to make as much impact as he would like being a professor, he started pursuing his career in business and entrepreneurship.

He joined Apple in 1994 where he worked on building e-world. eWorld was an early attempt at creating a social network and In a market where AOL had a commanding lead, eWorld was doomed to fail. In 1996, eWorld was officially shut down and the subscribers were offered incentives to switch to AOL.

In 1997, he went ahead to start his first company called SocialNet. SocialNet was created to provide users with opportunities for dating, roommate matching and professional networking. Like many other social networking platforms in the 90s, it didn’t seem like a promising venture.

The major reasons SocialNet failed were : Nobody really knew what it was, the public wasn’t ready for what it had to offer, and the platform lacked a clear purpose. It felt like an idea scattered all around. While building SocialNet, he joined the board of directors during the founding of PayPal and in 2000, Reid left SocialNet to become the COO for PayPal. His stay was a definitive one as he became an expert at competing effectively in an extremely competitive environment because for Paypal to survive, it had to compete fiercely for every advantage and opportunity it got. When Paypal got acquired by eBay in 2002, he had learnt a whole lot and he was ready to do SocialNet again, only this time better.

In 2002, he founded Linkedin – an online social network for business professionals to network – with his former colleagues. LinkedIn officially launched in May 2003 which was a huge success and by 2014, the platform already had over 332 million members and today it has over 260million monthly users. It has become the most advantageous networking tool for job seekers and business professionals. Today, Reid Hoffman is described as one of Silicon Valley’s most prolific and successful angel investors with an incredible network of entrepreneurs and executives in tech.

Here are the major lessons from his failure and growth:

Don’t just fail fast, learn fast: The goal is to learn fast and tackle the potential points of failure. From failing fast, you give yourself more time to correct your mistakes and change your approach.

Focus your product in one area: It was from releasing SocialNet into the world that he discovered what users wanted and what the demand was for. Most importantly, he learned that to be successful you need to focus and double down on one major area that matters to people (your users).

Don’t try to build a perfect product on your first trial: Reid spent so much time developing SocialNet because he wanted it to be very precise that he ended up missing out on building what users really wanted. Wanting a product to be perfect on the first trial will only leave you frustrated. Rather than spend so much time developing the perfect product, build your product and continue tweaking it based on the feedback from your users.

Don’t hire the wrong people: Reid was focused on hiring professionals with about 10 years of experience doing the same thing, but the problem was that these professionals worked with large companies in a stable market and they have probably never experienced a major failure. Hiring people who can get the job done but is also versatile is someone you need. Reid learned that by hiring generalists who were active learners, growth and pivoting will not be a pain because they are also evolving.

Have a client acquisition plan before you launch: You could build a great or a bad product and you wouldn’t even know because you don’t have enough users to tell the difference. It’s best to have a strategy to put your product in front of its users immediately.

know when to pivot: Learn when to ditch the original plan for the plan that your audience wants. Paypal started as an idea to build encryption on mobile phones and to sustain it, the synced payments for email. The email payment turned out to be a success for PayPal and of course, the original plan was dropped.

Understand that failure is a very real possibility: Starting a company is like jumping off a cliff and assembling a plane on the way down. The possibility of you failing despite putting in your best effort is real and it’s important to know that if you have learned from your failures, it might just be the beginning instead of the end.